skip to main | skip to sidebar

What this blog is about

It's an art blog.
Mostly about theatre... but also a healthy dose of pop culture, politics and shameless self-promotion.

It's a pickle, but eventually our Federal government is going to have figure out how to update Canadian copyright laws for the 21st century.

Right now, there's a private member's bill put forth by NDP MP Charlie Angus. In essence it's a small consumer tax on MP3 players. For that reason alone, it will probably die. But it's a really good attempt to try to deal fairly with the issue.

"Artists have a right to get paid and consumers have a right to access works. Digital locks and suing fans are not going to prevent people from copying music from one format to another. By updating, we will ensure that artists are getting paid for their work, and that consumers aren't criminalized for moving their legally-obtained music from one format to another."

The Edmonton Journal editorial staff is for it. Check out why. And (even) the National Post agrees.

If you do or don't but have a strong opinion either way, here's a great way to make some quick cash on the issue: check out thereelchallenge.ca.

From the Contest Rules:

Prizes will be awarded by the adjudicating committee to the Content Providers whose submissions promote creators’ rights and address the importance of content protection, from a creator’s perspective, in the most compelling way, provoke the most thought and feeling in the viewer, and are considered the most engaging, imaginative and the most innovative in content and delivery.

File this under "Oh, come on"

No, I'm not talking about Colarco's adapatation with prep school boys playacting as the two lovers.

Not even talking about the Zeffirelli film with a nude scene with a 15-year-old actress.

No, rather The Star is reporting that a Toronto school-touring production of Romeo and Juliet was almost cancelled due to a group of parents who disapproved of the show's sexuality.

... a woman who identified herself as Val, a home-school teacher from Hermitage, "struggled being here with my son. The sexuality was too much. Our children need to be more pure."

And, I guess, "several other teachers echoed her opinion."

Now, I haven't seen the production but I'm reasonably assured that all the actors keep their clothes on.

So, does that mean these folks are objecting to the script? That was written in 1595 (give or take)?

If so, kudos to the ensemble for an obviously vivid and faithful interpretation of the Bard's text.

To those teachers and parents of those oh-so-pure children... You do know that this is what your kids are listening to, don't you: 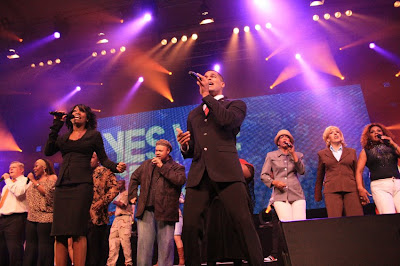 Hope! - A new musical about Barack Obama's ascent to the US Presidency opens in Frankfurt

I still don't know what to make of this one.

Yes, Barack Obama has world wide appeal. Yes, he even has a special connection to Germany. But a German musical about him?

"I had the initial idea right at the start of Obama's electoral campaign," American writer and composer Randall Hutchins told SPIEGEL ONLINE. "I found the atmosphere exciting and that was my inspiration. People hoped change would result in a better life. It was a beautiful, very social time."

Okay. Sure. That sounds like something to write about. And, checking out the photo gallery... yeah. Maybe that could be kind of fun.

But, wait. Just wait. What am I going to be looking at again?

Wearing a knitted cardigan and crooning into his microphone, Barack Obama paces around the stage, wooing Michelle with a love song. In another number, now clad in a suit, Jimmie Wilson who plays Obama, struts up and down, clasping his mike and leading a euphoric gospel chorus of "Yes We Can."

Do I have a problem with musicals? Not with this one. Nor this one.

Maybe it bugs me that this is a German creation. I just got back from Berlin last week. (PS -- Berlin is awesome!) I stopped by the Deutsches Theater to check out what was going on. I picked up a program. On the front cover was a promo shot from its production of Othello. 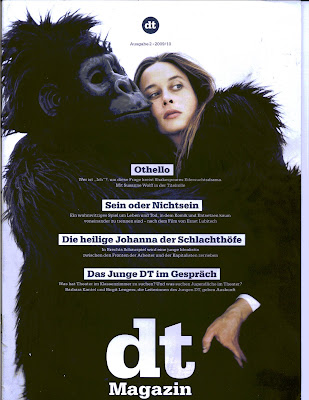 I don't know if the show was any good (I missed it), or if the photo is just a publicity shot designed to create a stir (and probably offence at the same time).

But it's exciting. It's risky.

That's what I like about theatre. Musical or not.
Posted by Aaron Talbot No comments: